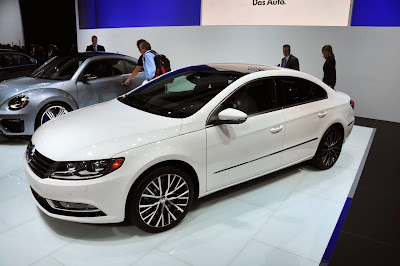 The most frugal version of Volkswagen's Passat CC might just take the title of "the sleek sedan with a coupe-like styling" from the Hyundai Sonata with its innocuous, slab-sided exterior which is undeniably elegant. However apart from a new styling on the grille and additional electronic whizz bangs, the 2013 Volkswagen CC might not be largely different from its predecessors. The car still holds its economical position with even lower pricing for American models without compromising on comfort, reliability and the desire for adventure that arises in enthusiastic drivers sometimes.

No longer referred to as the "Passat," the Volkswagen Group decided to drop the name and go with "CC" alone. This is not a wonder if you are living in the Eurozone where everything is being cut off to deal with the economic crisis, but a name drop wouldn't offer much reprieve - maybe they would have replaced the leather with the remains of the California wildfire that managed to take up much of Fisker Karma's interior. However if you have much "real baggage" fear not, for the car's boot size is large enough as well as the interior which is elucidated below.

If you have been inside a Volkswagen Group vehicle before, then you understand the instant inviting attitude of the dashboard even before you start the car - the VW Passat CC is no different. The leather seats are comfortable and seemingly luxurious, with handsome appointments here and there for a more "touchy" feel in its competition against the highly priced Mercedes CLS. The plastics are soft to the touch, the typefaces admirably concise and the entire cabin simple but distinctly attractive to the simple but attractive man. Head-room might not rival that of the Mercedes CLS but there is enough leg-room for a dwarf's party. The driver's legs are offset towards the centre and the power seats configure in 12 different dimensions, but the party doesn't end there. There are drinks for those going for the intermediate trims and desserts for those getting the upscale trims. If you feel lost, this is what I'm talking about: 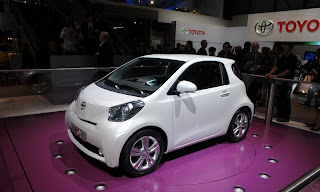 Toyota iQ is a praiseworthy and unique product with impressive dynamics. It is almost the same size as Smart, but it has four seats rather than just two seats. The reality is that it feels cramped but the driving experience it provides outweighs the smallness. Toyota's reliability and safety will give potential buyers piece of mind. The iQ is very expensive with even the base model costing over £10,000. When you can get the larger Aygo for under £9,000, you really think what is the big deal with the iQ?

The iQ is a unique and rare car. It has more length than a Smart as it aims to pack in seating for four. It is mainly aimed at young people who live in town or go about in town and want something small. The Toyota badge on this tiny car makes it reliable as it doesn't have the catchiness of a MINI, Abarth or Smart. As you would expect in any Toyota, interior quality and finish are top notch. The dash is asymmetric which allows one adult to sit behind another, once the front passenger seat is pushed right forward. 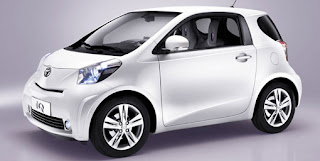 Toyota iQ comes in two engines, a 1.0 litre three cylinder petrol and a 1.33 litre petrol engine. The 0-60mph time for the 1.0 litre engine is less than 14seconds and the revvy engine is full of character. The 1.3 petrol engine is fast and performance is impressive with a 0-62mph time of 11.8 seconds but it lack the character of the 1.0 litre engine. With 9 airbags and a five star Euro NCAP rating it is very reliable. There's also the worlds-first rear window bag to protect rear seat passengers. Generally Toyota's are reliable and the iQ doesn't let you down either.
Read more »
1 comment:
Labels: Automobiles

As someone who has just came returning from a very lengthy generate all the way from Milton Keynes up to the north places of Scotland, I think I can securely say that generating lengthy ranges in a car is not much fun for most people! However, it does need a bit of preparing, so if you do have a journey to create, it is best to take time to create a few agreements rather than just establishing off and expecting for the best.

Firstly you need to get ready a few resources for yourself; some water and meals for the journey is essential unless you want to danger freeway assistance place accessibility and costs. If you are visiting during the cold months months season you should also have some bedding and probably consider a snowfall scoop in your car in situation you get snowed in somewhere.

You also need to get ready the car. You should examine your oil and water stages, examine the tire treads and demands, and make sure that you aren't due a car assistance before you get returning (don't ignore to examine that the additional usage won't mean it's required prior to you expect!). On a lengthy journey, fuel performance is even more essential, so you should try to vacant your car of everything that you won't be requiring on your journey. Excess bodyweight for your car to bring indicates additional fuel is used to shift the car.
Read more »
1 comment:
Labels: Drive, Tips
Older Posts Home
Subscribe to: Posts (Atom)